You are here: Home > Africa > Ethiopia > Raiders of the lost Ark 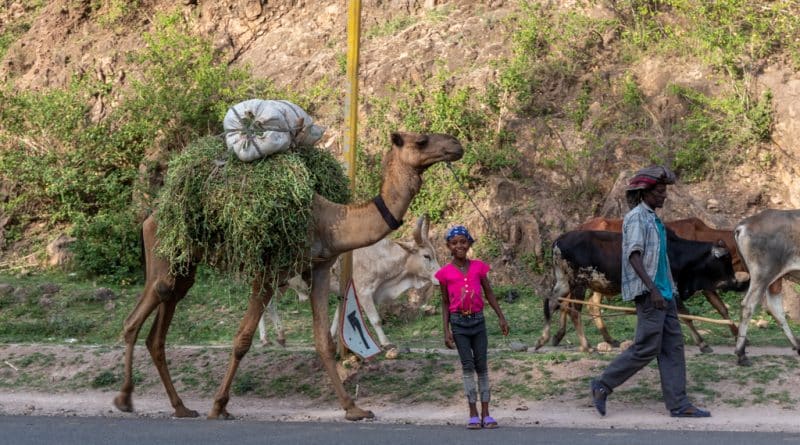 From the Omo valley, with its tribes that would not be out of place in a NatGeo documentary, we drove via Addis Abeba to the north of Ethiopia. Driving around I sometimes thought I was back in India, everywhere the same tuktuks drove around (just painted blue instead of yellow) and cars made by Tata. Need I say more. The good news is that after our time in India my car is covered with scratches and dents, so since ages I couldn’t care less about another one. Priceless to see the idiots in disbelief every time they cut me off, didn’t yield or tried to push me off the road and I gave exactly zero fucks. It was however imperative to leave the scene as quickly as possible after every collision. Because before you know it a crowd with AK47’s gathers and automatically blames the white guy for everything. Something that has become common practice in the west too, so you know exactly what I mean.

What I didn’t know, and probably neither did you, is that Ethiopia played an important part in the history of christianity. For instance one of the three wise guys that crashed Jesus’ baby shower came from Axum in the north of the country. And the Ark of the Covenant – which Indiana Jones was searching in the wrong place – was kept on an island in Tana Lake for centuries. Therefore we drove via Tana Lake and Gondor, through cinematic landscapes, to Axum. The place where the Ark is kept nowadays. At least, that’s what they claim. But women are not allowed in the church to begin with, and the building where the Ark is supposed to be is only accessible to one priest. I guess we’re gonna have to take his word for it. So without having seen it we continued. Our next visit was to the Debre Damo monastry, a short drive from Axum, where you have to climb into using an eighteen meter long rope. The most northern location during our tour through Ethiopia.

When we left the place I realised that I was now on the last stretch of my trip around the world. Because from there every day we would get a little bit closer to Cape Town, the intended last destination of the journey. To be honest, it was about time. As you know I’ve had enough of it for a while now. But first we needed to go to the Abuna Yemata Guh church. A rock-hewn church high up in a mountain, because of which you have to be an acrobat to enter that one too. After that we moved slowly as ever towards the crown of the Ethiopian collection of churches: Lalibela. Lalibela is a bit like Petra in Jordan or Ajanta/Ellora in India, but made by somebody with two left hands. After our tour in the north we scheduled a couple of much needed resting days in Addis Abeba. But what do you know, as soon as I leave any place all hell breaks loose. Just our fucking luck, all of a sudden we were without an internet connection. The hell.

7 August 2015 edwin.oonk@gmail.com Comments Off on Bot and Cher