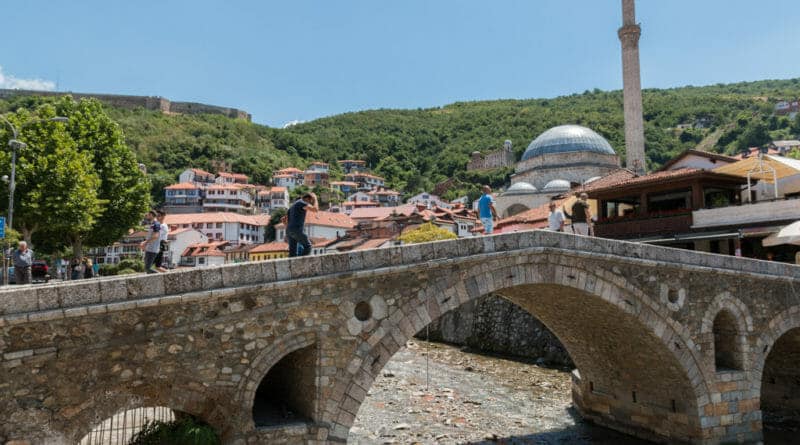 From Albania I continued my trip north, this way I ended up in the second newest country in the world: Kosovo. The country is barely older than my vacation because it only gained independence from Serbia in 2008. Back in the days of former Yugoslavia they already were an autonomous province in Serbia, but after the disintegration of Yugoslavia the Serbs revoked that status. At the end of the balkan war in the nineties they even started to cleans the country. Meaning removing the Albanese population. Almost 93% of the population being Albanese. The west intervened, after which it wasn’t until 2008 when the Kosovars declared their independence. This against the will of Serbia, therefore you still can’t travel from Kosovo to Serbia. And that’s why we still have troops stationed in the country to keep the peace under the KFOR flag. So far for the history lesson today.

One of the few points of interest in the capital Pristina is het Newborn Monument, placed right after the declaration of independence to emphasise that a new country had been born. When I was there they had thrown over the letters N and W. Of course I wanted to know why they did that. They did it to protest against the fact that Kosovars need a visa to travel to Europe (Schengen). ‘Well, that’ll teach them’, I thought to myself. Apart from the historic center of Prizren and this monument there’s not much to see or do in the tiny country, as you can see for yourself in my photo gallery. Fortunately I was in Pristina on a Saturday so I was able to check out the nightlife and go to The Zone. There I was pleasantly surprised by the fact that the girls in this muslim country (95% muslim) are able to cover up their whole body (at least certain parts) with barely the amount of fabric muslim women usually need to cover just their hair. So in the end I didn’t come to Kosovo for nothing ;-p