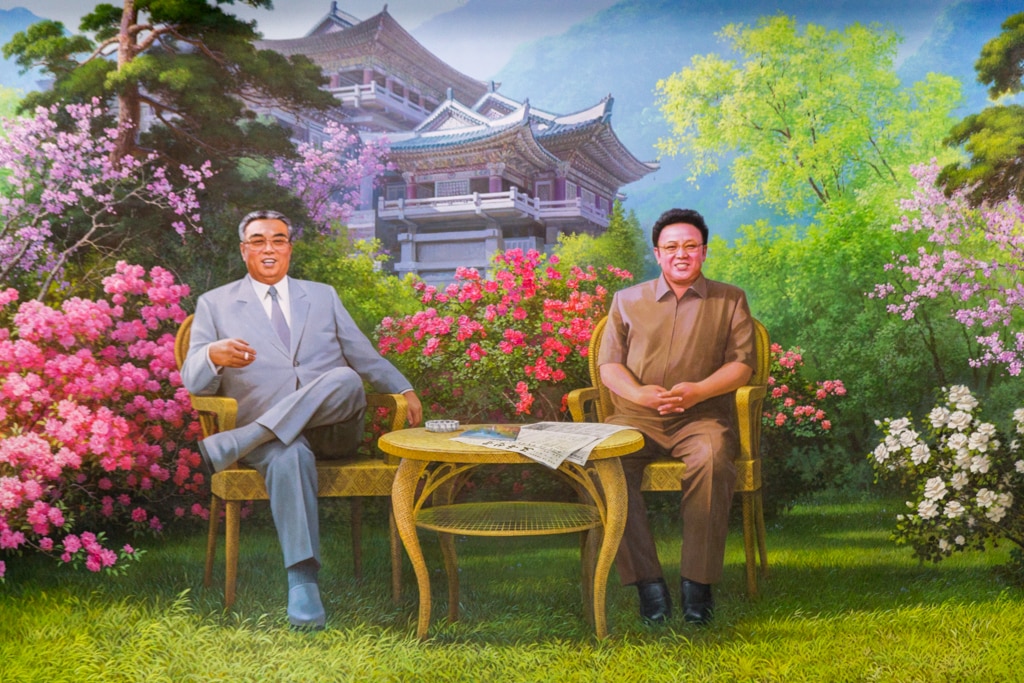 In the Democratic Peoples Republic of Kim, where the only registered voter (Kim Jong Fool) determines everything, you go from one surprise to the next. Before we went we’d heard and read horrible stories about this country and I can honestly say, if I’m being honest, that the reality is a lot worse. It started right away when we arrived and the North Korean authorities entered our train to check our belongings and I shot some video of them. Fortunately my GoPro doesn’t have a screen so they couldn’t see what I had filmed, and because they were unable to read the SD card with their equipment this trifle fortunately blew over. Hours later, in Pyongyang, when we stopped to have a look at the two huge statues of the criminals Kim Il Sung and Kim Jong-Il one of the girls from our group jumped in front of them while her friend took a picture of her. That was a big mistake, moments later when we were all sitting in the bus she was pulled out and through the window we saw how she was reprimanded. Her pictures were deleted and she was obliged to buy flowers and put them at the feet of the statues. The tone was set and everybody was scared to death.

The rest of our three days in the DPRK we weren’t left alone for a second. Our hotel for example stood isolated from the city on a little island in the Taedong river and we were only allowed to leave it when we left in the bus to go sightseeing with the group. Underway and at the various ‘attractions’ our guide flooded us with propaganda, the North Korean version of history and complete and utter nonsense. As a result I was constantly having discussions with her and asking uncomfortable questions, because of which she contradicted herself all the time and got tangled up in the official web of lies.  Time and time again this made her furious and unwilling to talk to me. When we stopped somewhere to take pictures of one of the rare places that we were allowed to take pictures of, the guides turned hysterical when I walked away from the group to shake hands with North Koreans passing by and to strike up a conversation with them. Most of them, by the way, refused to do so because they were afraid it would get them into trouble, or because they were, after being brainwashed all their lives, scared to death of foreigners. Especially of American imperialists who, according to North Korean authorities, want to colonize North Korea because of its strategic position.

One example of the lies we were told is that North Korea has freedom of religion. At least that’s what our guide told us when we were at a Buddhist temple and we asked her why this temple was spared in the atheist country. So we continued by asking why, if there is freedom of religion, we were asked at the border if we carried a bible with us. And why we were specifically warned before we went by the tour company to not bring one. She was unable to answer that question. Supposedly the reason is that if the people could read the bible they would find out that Jesus is mightier than their glorious leader. Another explanation came from a fellow traveler who said that various stories in the bible are well known in North Korea, only with their leaders as the protagonist instead of Jesus.

Well, that’s an explanation we can believe, also because of the fact that their calendar or era started in 1912, the year Kim Il Sung was born and because of the idiotic personality cult in the country. Literally everywhere you’re confronted with the ugly mugs and ridiculous statues of the criminals Kim Il Sung and Kim Jong-Il. Apart from that they pull up a phony facade of succes, prosperity and happiness for everybody, but everybody sees right through that. You’ll see the people in the streets and buses with hollow eyes like the life inside them has been extinguished. Barely ever can you see somebody having a chat or a laugh with someone else. What you do see, if you pay attention are emaciated people, among them children, working in the countryside under supervision of a uniform. There are huge power shortages, except for our hotel and some other places, whilst they do have advanced missiles and nuclear bombs. Everywhere we came, men in black were on patrol, keeping an eye on everybody and especially on us. The capital is filled with empty gaudy buildings and megalomaniacal monuments, of which the two statues of the criminals Kim Il Sung and Kim Jong-Il are in a category of their own. But more than anything you’ll see military everywhere, and when I say everywhere I literally mean everywhere. Extremely scary.

It was an unforgettable experience, but you won’t be surprised that we were really happy when our train crossed the Yalu river again and we had returned on Chinese soil.