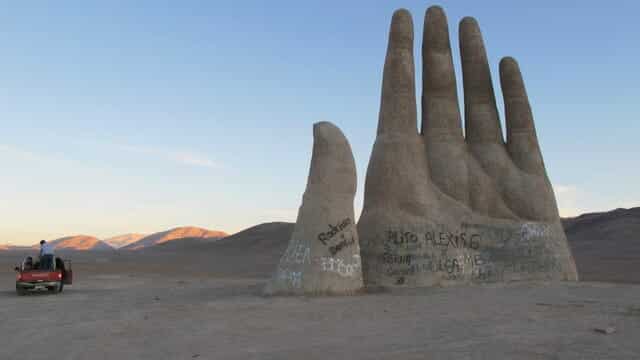 That’s right folks, it’s silly season again. In the Netherlands it means reruns on the telly everyday. But I can tell you that here in Chile things aren’t much better, it’s just that they don’t recycle television shows but the tourist attractions. You’ll probably think right now: “But Ed, that’s impossible.” Well pay close attention, for instance in Punta del Este in Uruguay there’s this work of art. And what do they have in Chile, just south of Antofagasta? This! What elke, close to Jericoacoara in Brazil they had a big rock in the sea with a hole in it, Pedra Furada. North of Antofagasta they have the same thing. And the sandy streets of San Pedro de Atacama looked a bit too similar to the streets of said Jericoacoara to be coincidental. The only repetition with which I am pleased is being reunited with my girlfriend, Lidia from Belém. Together we fled into Bolivia, let’s see if they can be a bit more original.

Instant update: I also saw a lot of new stuff, look for yourself.